GOD’S STRAIGHTENING IT OUT 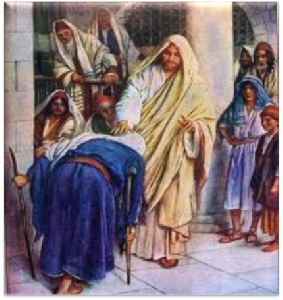 Luke 13:10-13, On a Sabbath Jesus was teaching in one of the synagogues, and a woman was there who had been crippled by a spirit for eighteen years. She was bent over and could not straighten up at all. When Jesus saw her, He called her forward and said to her, “Woman, you are set free from your infirmity.” Then He put his hands on her, and immediately she straightened up and praised God.

Our scripture lets us know that this woman was in the church bent for 18 years.  This blog is for those of you who are saved and in the church but you still find yourself bent.  This woman was going to church Sunday after Sunday with a condition that caused her to be bent much like some of us today.  Many of us are attending church Sunday after Sunday but we are bent.  This woman’s condition was visible to the natural eye; however, some of us are dealing with things that have caused us to bent that cannot be seen with the natural eye.  Many of us sitting in the church are bent in our thinking.  Some of us have been serving, preaching and teaching bent.  Something has happened in life that has caused you to be bent.  Some may be like Jonathan’s son Mephibosheth who was dropped and left lame as a result.  Some of us have been dropped by people who were supposed to carry and care for us and it has left us lame and bent mentally and emotionally and in a posture of always looking down instead of up.  The only time we should be looking down is in prayer.

That situation may have caused you to be bent, but what the enemy meant for evil God will turn it around and cause it to work together for your good!  Look at the story of Joseph, his brothers threw him in a pit, then sold him into slavery which landed him in Potiphar’s house where he was lied on and falsely imprisoned, but had he not been in prison he would not have been in position to interpret Pharaoh’s dream and ultimately end up in the palace as second in command.  I know you don’t understand it now, but when we give what we have been through to God He will cause it to work together for our good.  What you been through may bent you, but that bent position, that bowed down posture has only put you in position to pray.  How we respond to the trials of life is important.  Yes it happened, yes they left you, yes you are bent, but what are you going to do now?  Are you going to walk around bent in shame, disappointment and defeat or are you going to pray and believe God to straighten it out?  They say when life gives you lemons make lemonade or you can do like Beyoncé and make a hit record and make millions : )  But many of us are not Beyoncé so we can’t make a hit record but we can make lemonade with the lemons life throws at us.

Previous Post:
← BETWEEN A ROCK AND A HARD PLACE
Next Post:
TAKE UP YOUR BED AND WALK →