THE SUFFICIENT GRACE OF GOD 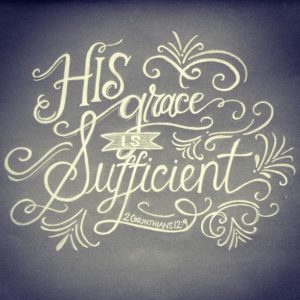 2 Corinthians 12:8&9, “Three times I pleaded with the Lord to take it away from me.  But He said to me, ‘My grace is sufficient for you, for my power is made perfect in weakness.’” (NIV)

This is a very familiar passage of scripture to many of us who have attended church for any numbers of years.  I have heard it preached, but this week as I have been meditating on this scripture God has really ministered to me through this scripture.  I believe God wants me and someone else to know that no matter what we are going through that His grace is sufficient, it is more than enough!  God’s grace is more than enough!  If God has not taken you out of that thing or turned that thing around, His grace is more than enough to sustain you in it!  Paul prayed 3 times for God to remove the thorn and God’s response to Paul was my grace is sufficient.  I’m sure that was not the response Paul was looking for.  Many of us can relate to Paul.  We are either praying right now for God to remove something or turn something around or we have prayed for God to remove something or turn it around.

When we pray we need to be open to God’s response, whatever it is. His response could be yes, it could be not right now, it could be no or it could be my grace is sufficient.  Sometimes God will not remove us from a situation or turn something around because He is doing something in us through it.  God is more concerned with changing us than changing our situations.  Often times we pray and ask God to change things and people when He wants to change us.  I heard someone once say that God will use those rough people and situations like sandpaper to smooth the rough edges out in us.  Stop praying and asking God to change others and ask God to change you.

Maybe God hasn’t removed that thing or turned it around yet because He wants to give you a personal revelation of who He is and reveal Himself to others through your fiery trial.   I’m reminded of the 3 Hebrew boys in the book of Daniel who were thrown into the fiery furnace because they refused to bow to King Nebuchadnezzar’s idol god.  It was while they were in the midst of the fire that God revealed Himself to the king and his officials.  The 3 Hebrew boys already had a revelation of God which is why they refused to bow, but God used this as an opportunity to reveal Himself to the King and his officials.  In Daniel 3 it says the King leaped to his feet in amazement and said didn’t we throw 3 into the fire?  I see 4 walking in the fire, unbound and unharmed and the 4th looks like a son of the gods.

God’s sufficient grace kept the 3 Hebrew boys in the fire.  God’s grace will cause what the enemy threw you in and meant to harm from being harmed and He will work it together for your good and His glory.  Being thrown in the fire worked out for the 3 Hebrew boys good because they were promoted and it brought God glory because the King went on to praise the God of the 3 Hebrew boys.  Not only did he praise their God, but he issued a decree that anyone that spoke against their God would be cut into pieces and their houses burned and he declared that there is no other god who can save like their God!

So as always, I just want to encourage someone who is in the fire today and let you know that God’s grace is sufficient!  The greater the trial the greater the grace.  God may not have removed you from the fire, but He will get in the fire with you.