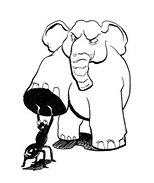 I wanted to share this thought with you today and I pray it encourages you because there are many people who feel like God is not moving on their behalf and that God has forgotten them.

In Exodus 23:30 the Lord tells the Children of Israel that little by little He will drive out the inhabitants of the land before them until they have increased enough to take possession of the land.  “Little by Little”.  I want to encourage someone today and let you know that God is doing “it” little by little.  Someone may be wondering when God when, when will may change come, when will may breakthrough come…, and your feeling discouraged because you feel like God doesn’t see you or doesn’t care about you and that He isn’t moving on your behalf, but God wants you to know that He sees you, He cares for you and He is moving on your behalf, but He’s doing it little by little.

If we read the preceding verse in Exodus 23 we find out why God is doing it little by little.  God says that I’m not going to drive them out in a single year because the land would become desolate and the wild animals too numerous for you.  God in His infinite wisdom knows that if He does it all at once and doesn’t do it little by little it’s going to be too much for you to handle so He has to do it little by little until you have increased enough to take possession.  I know you think you’re ready now, I know you think you can handle “it” now, but remember to whom much is given much is required.  Whatever your “it” is, know that God is increasing you and preparing you to take possession of “it”.

I don’t know about you but I’m excited that God is doing it little by little, but I wasn’t always excited about the thought of “little by little”.  I wanted God to do it and do it now!  I wanted what I wanted and I wanted it yesterday!  But growth and maturity has taught me patience, not only has it taught me patience but it has taught me to trust the timing of God and to trust His plan for my life.  His word says in Jeremiah 29:11 that His plan for my life is a good plan, a plan to bless me and to prosper me and not to harm me.  Can I tell you today, no matter where you are in the process you can trust the plan of God for your life.  God has a good plan for you!  This process that you are going through right now isn’t designed to destroy you but to develop you, to increase you enough to take possession of the promise.  We get excited about the prayer of Jabez, over God enlarging our territory, but before God enlarges your physical territory He wants to enlarge the territory and the borders of your mind.

If your mind and your thinking are small and you don’t see yourself the way God sees you, you will miss out on possessing the promise.  Look at the 12 spies in Numbers 13.  They were trapped in small thinking.  The bible records that they saw themselves as grasshoppers and this incorrect view of themselves caused them to miss out on possessing what God had already promised them.  Some of us see ourselves as grasshoppers, but God sees us as giant slayers!    I don’t know what giants are before you, it may be the giant of fear, the giant of doubt, the giant of rejection, the giant of discouragement… God knows what giants are in the land and He still promised to give it to you.  Don’t allow giants to stop you, because the God in you is greater than the giants before you and giants do fall!

Don’t allow the giants you see to discourage you.  Don’t focus on what you see with your natural eyes, focus on what He said.  I know what you see doesn’t look like what He said, but walk by faith and not by sight until you see what He said.  Someone may be looking at where they are right now and it doesn’t look anything like what God showed you; be encouraged because God is doing it little by little.  It’s coming together little by little.  I heard someone once ask the question, can an ant eat an elephant?  And many thought to themselves, no, but, yes an ant can eat an elephant little by little.