IT HAD TO HAPPEN 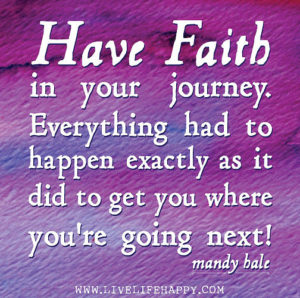 John 9:1-3 As He went along, He saw a man blind from birth.  His disciples asked Him, “Rabbi, who sinned, this man or his parents, that he was born blind?  Neither this man nor his parents sinned, said Jesus, but this happened so that the works of God might be displayed in Him.”

I just want to encourage someone who may be going through something that it had to happen!  We may not understand it, but it had to happen and it had to happen that way.  In the scripture we have a man who was born blind; not because he sinned or his parents’ sinned but so that God’s works would be displayed in Him.  So many times when we are going through something the first thing people do is blame us and point the finger at us and say we must have done something to what we are going through.  Some stuff is a consequence of our own actions, but I’m not talking about that today, because as we see in this scripture this man’s condition was not the result of sin.  We can also look at the story of Job.  Job was afflicted not because of what he did wrong but because of what he did right.  Could it be possible that you are going through not because you did something wrong but because you did something right?  Could it be that you are going through because like brother Job God can trust you with trouble?  The bible lets us know that when the enemy came before God, God said to him have you considered my servant Job there is none like him, he is blameless and upright, a man who fears God and shuns evil.  God could trust Job with trouble?  Can God trust you with trouble?  If you’re like me you, after seeing what happened to Job, you probably don’t want God to trust you with trouble.   But can God say that about you, have you considered my servant ____ she/he is blameless and upright, a man/woman who fears me and shuns evil?

God allowed this man in the text to be born blind in order that His miracle working power would be displayed in him.  Could it be that God is allowing that situation that you are going through so that His glory would be revealed in you?  The bible lets us know that our present sufferings are not worthy to be compared to the glory that shall be revealed in us!  It also goes on to tell us that after we have suffered a while, that the God of all grace who has called us will Himself perfect, establish, strengthen and settle us!  I know we don’t want to suffer, but we must trust Him in our sufferings that His glory will be revealed in us and He will perfect, establish, strengthen and settle us.

Don’t quit in the middle of your process and don’t die in the middle of the storm.  Keep the faith!  The only way out is through.  God will bring you out!  He’s bringing you through to bring you too, but you have to go through it to get to it.  The Children of Israel had to pass through the wilderness to get to the promised land.  Joseph had to go through the pit, being lied on and falsely imprisoned before arriving at the palace.  It had to happen that way.  It was all a part of God’s divine plan.  What the enemy meant for evil God meant for your good!  It doesn’t always feel good but we must trust that God is working it together for our good!  It had to happen and it had to happen that way.  So don’t quit, and don’t you dare faint for you shall reap a harvest of blessings if you faint not!  Hold on, God’s glory will be revealed in this!