LAUNCH OUT INTO THE DEEP 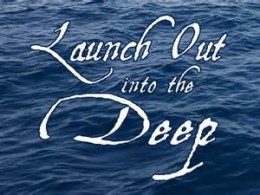 Luke 5:1-8, So it was, as the multitude pressed about Him to hear the word of God, that He stood by the Lake of Gennesaret, and saw two boats standing by the lake; but the fishermen had gone from them and were washing their nets. Then He got into one of the boats, which was Simon’s, and asked him to put out a little from the land. And He sat down and taught the multitudes from the boat.   When He had stopped speaking, He said to Simon, “Launch out into the deep and let down your nets for a catch.”   But Simon answered and said to Him, “Master, we have toiled all night and caught nothing; nevertheless at your word I will let down the net.” And when they had done this, they caught a great number of fish, and their net was breaking. So they signaled to their partners in the other boat to come and help them. And they came and filled both the boats, so that they began to sink.

Let’s talk about the word launch.  The word launch is defined as to send forth, release or catapult.  A catapult is a device in which accumulated tension is suddenly released to hurl an object some distance.  I keep hearing the word catapult.  Many of us will be catapulted; God is going to use all the tension that you have been experiencing to suddenly launch you forward!  It’s going to happen quickly and unexpectedly.  Someone has been asking God “when”.  You feel like there’s been so much tension, that you have been stretched so tight that you cannot be stretched anymore without breaking, but God is about to release you suddenly!  It’s going to happen when you least expect it.  Keep the faith, keep believing and keep trusting God! Galatians 6:9 says that in due season we will reap if we faint not.   Don’t throw in the towel, don’t quit and don’t faint!  Often times many of us faint just before the breakthrough.  You will breakthrough if you don’t breakdown!  Trust that He knows how far to stretch you.  The stretching is not to break you, but to launch you forward.  Have you ever shot an arrow or saw someone shoot an arrow forward or maybe a rubber band?  When you were a kid, have you ever pulled a rubber band back to shoot it forward at someone?  The further back you pull that rubber band the further it is launched forward.  The more you are stretched the further you will be launched forward!

Will you answer the call to launch out into the deep?  Tell fear, worry, doubt and unbelief it must go!  No more doubting that God got me, no more fearing that I will drown because my lifeguard walks on water!