BETWEEN A ROCK AND A HARD PLACE 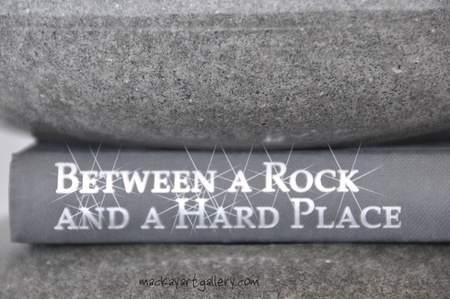 Isaiah 43:1-3, But now, this is what the Lord says— He who created you, Jacob, He who formed you, Israel: “Do not fear, for I have redeemed you; I have summoned you by name; you are mine.  When you pass through the waters, I will be with you; and when you pass through the rivers, they will not sweep over you.  When you walk through the fire, you will not be burned;
the flames will not set you ablaze.  For I am the Lord your God, the Holy One of Israel, your Savior”. (NIV)

Do not fear for God has redeemed you. 1 John 4:18 says, “There is no fear in love. But perfect love drives out fear, because fear has to do with punishment. The one who fears is not made perfect in love.”  The enemy wants us to fear punishment for our mistakes and sins. He gets in our head and tells us lies like “God’s not going to do it for you because you did (fill in the blank)”.  He wants us to think that God is keeping a record or a score card of all of our wrongs, but Isaiah 43:25 tells us that He blots out our transgressions for His own sake; and remembers our sins NO MORE.  The enemy is the accuser of the brethren.  He’s constantly accusing us and hanging our mistakes and sins over our head to keep us in condemnation, but Romans 8:1 says that there is no condemnation to those who are in Christ Jesus who do not walk according to the flesh, but according to the Spirit.  Condemnation leads to feelings of guilt, shame and fear. But we do not have to fear because God has redeemed us. When I looked up the word redeem, it is defined as to compensate for the faults or bad aspects of something. God compensated for our faults and bad aspects, He compensated for our sins by sending Jesus who bore all our sins.  Jesus paid it all! Not some but ALL! Our sin debt has been satisfied and paid in full!  Hallelujah, thank you Jesus!!!

It doesn’t matter what we go through in life, we do not have to fear because Jesus redeemed us and God has called us by name and we are His very own and He protects His own.  He said when we go through the waters He will be with us. In life we will encounter storms. I often say that it doesn’t matter who you are, it doesn’t matter what title is before or after name, there is a storm out here that will rock everyone’s boat and threaten to capsize your boat and drown you in the issues of life. But we do not have to fear because we do not go through the storms alone; Jesus is with us. The same Jesus who speaks to the storms; the same Jesus who speaks to the winds and the waves and they obey.  Yes that Jesus, He is with you in your storm so fear not because your storm is subject to Him!